After I picked up Marco at Maun International Airport we prepared ourselves for the trip to Moremi and to Chobe National Park. We 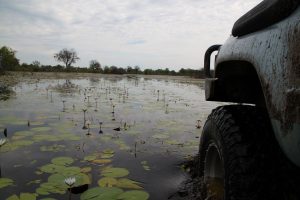 found out that the park permit was given by the government at the Wildlife Reserve and all the campsites in the park were privately owned. If that wasn’t enough, we realized that the park permit for two people including vehicle was more than 30 Euro per day. The campsite-fee even more! So we decided to get the park permit but camp in the bush. Unfortunately, we got detected by a guide. He was not amused but we could leave the park without paying any fine. So we started at 7 am from the north gate in Moremi to the Mababe Gate at Chobe Park. We followed the navigation system but after a while we found ourselves in front of a huge flooded area. We discussed to check how deep the water really was so we drove into the water. Although we could not see any ground or the track we kept on following the way or the direction we thought the way must be, but after 250 meters we entered a deep section. The tires were already completely under water and we were afraid to drown the car. So Jan had this brilliant idea to leave the track and make a move through the under-water-bush around the deep section. 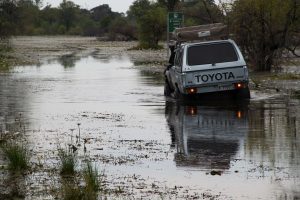 Marco agreed but we both did not feel very comfortable with it. We left the track and the water was not as deep as on the way but suddenly the wheels were spinning and every try to get out of the mud brought the car deeper in the mud-hole. We panicked a little because we were in the middle of nowhere in a flooded area with two hippos splashing in the water 200 meters away from our stranded Bigfoot. Jan suggested trying if the winch might be long enough to reach a tree about 15 meters away, so that we pull the car out of the hole to get back on the way. Marco was not happy that someone had to get out of the vehicle into the water but he also saw that there were not many other possibilities. So I put my long pants, pulled the socks over it and jumped out. The water reached to my bum but I bit on the bullet, grabbed the hook and told Marco to pull the winch out with the remote control. The winch did not move a single inch!
Now we were in serious trouble. We got stuck far out in the Delta, where nobody would come along and no way out. We already calculated what we should take with us in case we had to leave the car and try to find the way back to the next lodge crossing herds of elephants, prides of lions and some buffalos. How long can the navigation system survive without charging? Which way to get to the next lodge? How to behave in case of meeting elephants? Jan caught at his last chance; he took the hammer and knocked the hammer against the starter of the winch – and surprise – the winch began to work. So Marco and Jan started to take the steel rope around the tree and together with the winch, Marco could drive the car out of the hole. He changed the gear transmission ratio and got the car back on the place where we assumed the track was. This was a lesson for us. We sighed. Reliefed we drove straight out of the water to the next lodge to ask for the way to Chobe National park. They told us that last year the flood way so high that they had to build a lot of new roads which were not covered by any navigation system. Finally after a 10-hour drive we reached the gate of Chobe National park.