During my flight research I found out that a lot of flights from Frankfurt to Johannesburg have a stopover in Cairo, Egypt. One of them was landing in 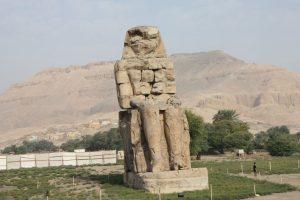 Cairo at 9 a.m. but leaving late at 10 p.m. First I had the idea about hopping out of the aircraft in the morning, running up the Pyramids of Giza, coming back to the airport in the evening and fly to Johannesburg. Well, when my Mom heard this, she wanted to come with me. “You have to see the Pyramids once in your lifetime!” We changed the plan from one day to a whole week: five days in Cairo and another two in Luxor…

End of September is a really good time for a holiday in Egypt: It’s still pretty hot, but not peak-season in the Nile-delta and the return-flights were only about 300-400 Euro.
Cairo (القاهرة) is the largest city in entire Africa and the Arab World. The population is about 7 million people in the city and more than 17 million in the urban region of Cairo.
We chose a hotel right in the heart of the city in the neighborhood of Zamalek. From here we discovered the Pyramids of Giza, the Sphinx which is 60 feet high and more than 220 feet long. We went to the Egyptian Museum with 136.000 exhibits from all over Egypt. We visited the Citadelle, at least 3 mosques and the bazaar (suq) “Khan El-Khalili”. Khan el-Khalili is an ancient huge bazaar, but some of the shops have also their 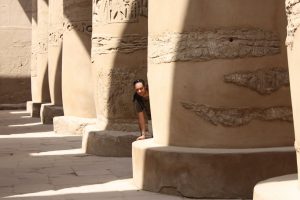 own little factories or workshops.
After a while we got used to the taxi drivers who always try to rip you off. Usually you pay 1 EP (Egyptian Pound) for one minute. This is about 1,40 Euro per 10 minutes. The easiest way is: ask if the driver knows the destination, sit in the back, get the ride, get out of the car, give the driver the “correct” amount of money through the window without talking about the price and disappear 😉

After a few days we had enough of Cairo and I tried to book a flight to Luxor. The price displayed on internet offers was affordable, but there was no way that to book via internet less than 3 days in advance. So we walked slightly annoyed into a EgyptAir office and SURPRISE, the flight was 60 Euro cheaper!
After we got our tickets we found out that the temperature there was at about 100°F. so we were asked to be careful and stay in the shadow during midday.
In my opinion Luxor is even more amazing than Cairo. To see what people build 3.000 years ago is unbelievable and stunning. The Karnak Temple, the Valley of Kings and the Temple of Hatsepsuth (something like that) are musts on a daytrip.
We stayed in the Sofitel Karnak Luxor Hotel Ressort, the best buy in town. The hotel complex is located 3 km from the Karnak Temple, has Nile-view and a huge pool. Taxi to town and back is about 25 EP (3 €) A day trip to the sights is about 100 EP.
We flew back two days later and relaxed on our last day, did some shopping for the kids and after dropping my “mummy” off at Cairo Airport, I am looking forward to explore the real Africa 😉