After spending a long time in different parts of South Africa I rushed along the northern roads to Namibia. Namibia is situated in the south western

Africa, very dry, with a beautiful landscape. With more as double the size of Germany, but only a population of 2.1 million people, Namibia is the least densely populated country in the world after Mongolia. 2.5 inhabitants per square kilometre.

As a former German colony in 1884 and known as “German South-West Africa”, a lot of the street names in Namibia are in German and many people spoke German to me, so that it felt sometimes like home. However the weather reminded me that I was in a subtropical country, but there are huge differences in climate between the northern and southern parts of the country.
I crossed the border in the south (where only 7% of the population lives) and drove through a remote part of the Namibian land with mountains, dry valleys and gravel roads with thousands of kilometers of fence. Some lodges or farming houses had a 31 km entrance way from the gate to the farm 😉

I went to Fishriver Canyon which is the biggest canyon in Africa and one of the most spectacular canyons in the world. It is a stunning view from the edge even with the knowledge that the Grand Canyon in the U.S. is almost three times deeper. The activities here were limited due to the rain season. The 90 km 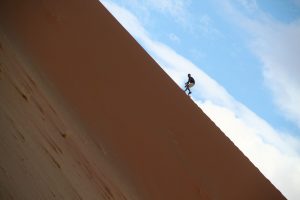 walk was closed, so was the 4x4-track along the canyon. I had to drive back to Seeheim to get to Lüderitz at the coast. I met Sebastian Süß there. He and his friends established the “Goals connect e.V.”. They bought a preowned 4x4 in England and drove all the way from Germany to Cape Town. On their way they visited a lot of development aid institutions, played soccer with the kids and at the end they donated their car to another institution for kids in Namibia. Here is a link to the (German) Namibian newspaper  –> to the newspaper
In Lüderitz I visited the old ghost town called Kolmanns Kuppe (Kolmanskop) where the abandoned diamond mine is situated and lots of German miners settled in this area, to collect diamonds from the sand in the beginning of the 20th century. In these times you could even pay with diamonds in Lüderitzbucht. A 1-carat diamond was worth 3, 50 Mark there and already 28 Mark in Europe. They say that Kolmanns Kuppe was the richest town in Africa during its time of prosperity, but after 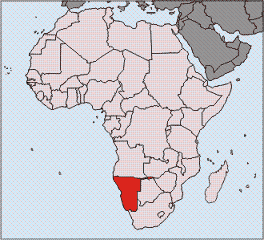 the last diamonds were found, the diamond-field slowly exhausted and was ultimately abandoned in 1954 when everybody left the town. The southern area around Lüderitz is still “Sperrgebiet” (prohibited area) – most unfortunate for me, because another track through deep sand with Bigfoot was not accessible.
From there I started a long way to Sussusvlei in the Namib Desert, which is considered to be the oldest desert in the world. The temperature rises to 40 °C in the hottest hours of the day and after 10:00 a.m. It was not fun anymore to climb the sand dunes in the valley. I spent almost two days on the campground in the park and took awesome pictures during sunset and sunrise.
On my way out of the desert I had bad luck with the car again: At first the mirror fell off, then the brakes on the back were leaking, after that the handbrake died on me, a few minutes later I realized that the shocks were not working proper anymore and eventually the spare tank which I had fixed with soap before was also leaking again. Instead of camping in the wild I rushed to Walvis Bay to find an accommodation and a cheap workshop. 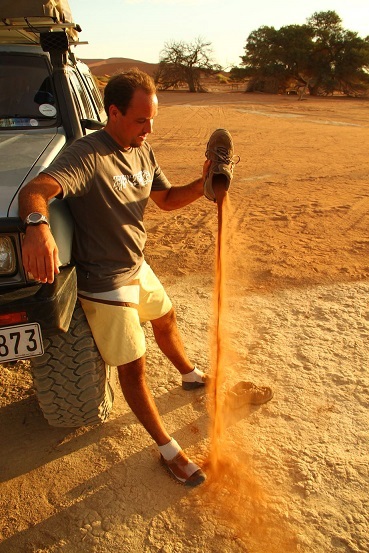