After a short break of almost 1 year, I still owe our readership a few travelogues and a final conclusion about my trip around the world – especially in

Africa.
The remote northwest of Namibia is undoubtedly one of the wildest and most spectacular parts of Africa. It is no area of intensive tourism and you need quite a bakkie to conquer all the roads and tracks. One of the most famous tracks is the Van Zyl’s Pass – which is hard to drive through even for professional 4x4 drivers in S.A. and Namibia. I decided to skip the adventure, because of my old bakkie and my even older uncle 😉
Despite skipping Van Zyl’s pass, we have seen incredible desert landscapes like the remote valleys of Kaokaland West and the impressive red mountains of Damaraland North. We went to the Ruacana Falls close to the border of Angola and met friendly people on our way through the desolated areas of far northwest Namibia.
We left Etosha through the north gate to enter Ovamboland. Ovamboland is not very touristic- While my uncle kept an eye on Bigfoot, I went shopping and was the only white guy in the middle of hundreds of Ovambos in the supermarket.
From there we drove along really bad roads on our way to Ruacana Falls. After the falls we crossed the Kaokoland with native Himba and Herero tribes a few of them still dressed the same way they did hundreds of years ago. 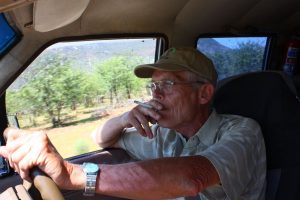 We had quite a thrilling time when the 19 year old engine of Bigfoot had some cutouts after crossing the second river with a water depth of app. 70cm!
My uncle stayed relaxed and took some pictures out of the window, when the revolutions per minute went under 2.000 and the motor shut off automatically.
But we managed and got out just like we survived all the other adventures. On our way back into ‘civilization’ we visited the most remote and mind-boggling area – Skeleton Coast, where less than twenty people per day (during this time of the year) have over 16,000 square kilometres to explore.
My uncle organized an overwhelming day on the 23rd of February – my birthday in Swakopmund. He invited me for everything during this day, including a birthday present and a lot of drinks.

From Henties Bay via Swakopmund and Wavis Bay we drove back to Windhoek – more than two weeks passed and my uncle took a flight back to Germany.